Cookie preferences
This website uses cookies, which are necessary for the technical operation of the website and are always set. Other cookies, which increase the comfort when using this website, are used for direct advertising or to facilitate interaction with other websites and social networks, are only set with your consent.
Configuration
Technically required
These cookies are necessary for the basic functions of the shop.
"Allow all cookies" cookie
"Decline all cookies" cookie
CSRF token
Cookie preferences
Currency change
Customer recognition
Customer-specific caching
Individual prices
PayPal payments
Selected shop
Session
Comfort functions
These cookies are used to make the shopping experience even more appealing, for example for the recognition of the visitor.
Note
Statistics & Tracking
Affiliate program
Track device being used
Categories
Information 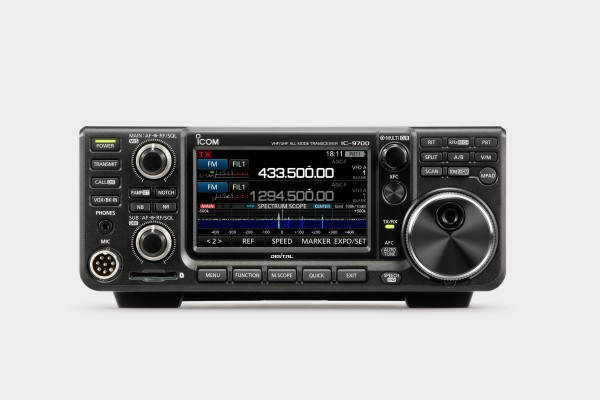 The IC-9700 is also the perfect companion to the IC-7300 HF radio. Measuring the same size, both radios provide almost identical operation. Using the IC-9700 and IC-7300 creates the ultimate, compact radio station covering the VHF, UHF, HF and 1200 MHz bands. The IC-9700 is the only VHF/UHF all mode transceiver that enables a variety of VHF/UHF operation including DX, contests, satellite/EME and D-STAR.

144, 430, and 1200 MHz All Mode Transceiver Including Satellite, DV, and DD Modes
Without installing any option unit, you can enjoy Multi-band operation. The IC-9700 includes D-STAR (a digital voice and data protocol specification for amateur radio) DV and DD modes. In addition, Satellite mode is built-in! There are three antenna connectors for 144, 430, and 1200 MHz.

Incorporates Icom’s RF Direct Sampling System
The IC-9700 adopts the RF Direct Sampling system (for 144 MHz and 430 MHz). In this system, signals are processed in the digital domain by the ADC and FPGA. This is different from legacy superheterodyne systems, where the signals are processed in a mixer that includes nonlinear elements. Therefore, the signal purity is very high, and clear audio can be generated. For 1200 MHz, the Down Conversion IF Sampling method is adopted.

Instinctive Operation with the Touch Screen
You can easily set the operating frequency or mode by touching the standby screen. The MENU screen allows you intuitively change settings including those for satellite communication or D-STAR operation. Entering Memory channel names is easy to do on the character input screen.

The Very First VHF/UHF Real-Time Spectrum Scope and Waterfall Display
This is the first time that a real-time spectrum scope and waterfall display comparable to an HF high tier transceiver have been introduced in a VHF/UHF transceiver. With the high-speed spectrum scope, you can instantly grasp your operating band condition and you can set the frequency to a destination signal with a simple touch on the screen. You can also view receive signal history using the waterfall display.

Independent Receiver, Full Duplex Operation
The IC-9700 can simultaneously receive on two different bands, and two different modes. For example, you can receive on the 1200 MHz band in AM mode while receiving on the 144 MHz band in FM mode. This function will be a significant advantage when participating in contests, or DX hunting. Furthermore, the IC-9700 is Full Duplex which enables you to transmit on the main band while receiving on the sub-band allowing you to enjoy Satellite operation.

Audio Scope Function
Making good use of the Audio Scope function, various Audio characteristics, such as microphone compressor level, filter width, notch filter width, and keying waveform in CW mode can be monitored. Transmit or receive audio can either be displayed on the FFT scope and the oscilloscope.

D-STAR Operating Functions
The IC-9700 has the D-STAR Repeater (DR) function. The DR function can be used on both the main band and sub band. Moreover, by using the DD mode, you can browse the Internet through a repeater station.

Comprehensive Menus for Satellite Operation
The selectable Main, Sub, Normal, and Reverse Satellite Screen menus make Satellite operation easier. Even in Satellite mode, you can use the high-quality spectrum scope.

Up to 99 Satellite Memory channels
The IC-9700 has 99 satellite memory channels that allow you to store both uplink and downlink frequencies and operating mode.